This thing took way longer than I expected, But it's finally done!

Well, the first part of it. I decided to split the planned content in three issues. This one will focuse on the keep and the wilderness regions around it.

The Stronglaw Keep has a list of descriptions and contents for each building and a notice board with 20 "adventure hooks" tied to the hexcrawl setting, the Wicked Pallovalley.

The hexcrawl has 36 hexes divided into 6 different regions, each one with it's own list of contents, rumours and random encounters!

20 pages of system-agnostic content and ideas ready for your table! Including some optional rules and procedures for running hexcrawls.

Some things left to be done along the way:

For now, you have access to the first document in both single pages and double page spreads. Anyone who donates at the minimum price will have access to every file uploaded in the future, including new editions, translations and so on.

AND if I find a good place to print on demand you will also have a special discount to print the zine at cost!

Have a good time with your friends and thank you for supporting my work! 🙏

In order to download this zine you must purchase it at or above the minimum price of $5 USD. You will get access to the following files:

Support this zine at or above a special price point to receive something exclusive.

Get the zine for free if you couldn't afford a copy. Hope you have a great time! ✌️

Posted below is a Review I wrote for this project before learning Itch.io doesn't apparently show this in a public way:

Alex Damaceno's "Beyond the Borderlands" is a worthwhile purchase for even the most frugal tabletop RPG player, as it provides a beautiful marriage of artistic whimsy and utilitarian design. With inspiration clearly taken and acknowledged from the classic "Keep on the Borderlands" module, what is provided within the first issue is something most Game Masters need but seldom consider until it is too late: an exceptionally modular micro-setting starter zone from which adventures may begin.

Stronglaw Keep is well laid out in an isometric illustration which gives a clear sense of how one could navigate through it, defend it, besiege it, stage ambushes, or go unseen by watchmen. Beyond the diagram, the keyed locations are all fairly elaborated upon, enough that a GM could slot in other modules, NPCs, and rumors to fit the locale without much additional tailoring. Intrigue on how one could influence, blackmail, or usurp the Bailiff is casually layered throughout the locations; his older brother runs the Bluewine Tavern, the Blacksmith must obey the Bailiff's orders, et cetera. Just enough information and a sense of flavor to make use of the area; yet generic enough that you could easily replace any name with something more befitting your personal setting desires.

Loot and Stuff is where the deeper utility comes into play, outlining the various treasures and equipment which can be found within the Keep. Nothing here is outlandish or of a game-breaking power; rather instead it skews towards the small comforts that might otherwise go unappreciated. Variety is had to the food stuffs, though all are simple. Guests are of a variety at the Inn, and they speak to potential intrigue in the surrounding Borderlands (which once again, is generic but flavorful enough to invoke curiosity.)

The Notice Board has ample rumors, or rather hooks which could be a good basis for getting a party out into the field, fleshing out further intrigue or plotlines, or what simply to change up the status quo. Among such rumors and hooks are also a few bits of idle gossip, pinned up; which could be used to flesh-out any character who may have posted such things.

The Wicked Pallovalley section itself offers a very basic but entirely useful set of travel rulings for hexploration; and though they are not of great use to me I know from personal experience that making travel rules fun is akin to finding the Holy Grail, so I'll not spite efforts made; it does its works.

I would note my first Caveat here though; we receive an amazing map of the Pallovalley, but our introduction to its localities does not give us a sense of why we should adventure in it; it is there of course, but I like a bit of purple prose, a paragraph to sell the intrigue of this region, that this is a borderland taken by monsters who will claw out towards civilization, or that the dark forces of Chaos seek new power here and must be stopped; just a small overarching sense of why this realm is dangerous fits my proclivities; but this is a Caveat not an issue proper which would steam my grits.

We are given exceptionally fun hex illustrations of the various sub-regions; the Keep's Domains, Hunting Groves, Dusky Woods, Sludgy Bog, Rockfall Range, and Scarlet Forest: each with a d6 of region specific rumors (noted as True, False, or Partially False), and a 2d6 of Regional Encounters. All of these have enough going for them to invoke curiosity, inspire a session, or make for an interesting encounter---and this is before we get into the numbered hexes which possess detail enough to make their gimmick or core feature succinctly known.

Travel thus, throughout the Pallovalley, will always have something going on, and given the size of the regions themselves there shouldn't be too much repeated material unless desired. These localities are perfect to tailor sessions for, and I must applaud that; no hex feels a wasted place, and no encounter seems generic to the point of being unnecessary.

What Comes Next is a worthy section to note; as it ensures to us that there will be two more zines in this series; a Dungeon zine and a Bestiary zine--with note that all the Bestiary entities will be illustrated and assembled for paper miniature use. The dungeons themselves sound interesting, good enough to teach the basics of a world of them to newer players or those wishing to get back to the simpler roots of the hobby.

Of Note: Demaceno has posted both The Kobold Lair & The Goblin Caves as a One Page Dungeon with map, illustrations, et cetera; which could be of use if you want to delve right into using this setting from the get-go with a cohesive aesthetic vision present.

General Notes: I am a big fan of Demaceno's work, both from a design perspective and for a charm of the artistic perspective. I would wholeheartedly recommend this product and the whole of Alex's works to anyone who wants to get involved in tabletop role-playing games. I would say I think his work is most useful to a new Game Master, someone who wants to experiment but might require additional guidance to get what it is they want out of something. The aesthetics help make it approachable and fun, the tone is enchanting in how it makes you want to have fun.

Pairs Well With: As a long fan of the Chaos Scar setting from 4th Edition D&D which also took heavy inspiration from the Keep on the Borderlands series; I would recommend those modular adventures which could fit well into the Pallovalley and give it further longevity. Additional Borderlands inspired work could go well with it, though this may require further tailoring on the part of the GM. I would likely run Beyond the Borderlands with a simple system that fits my personal tastes, such as the Black Hack or Whitehack, something that is easily accessible and clear in its purposes; as I think Beyond the Borderlands might work best in such a scenario.

End Notes: I rate this work a 5/5. It has a lot of amazing things going for it, and the caveats or not entirely favored thoughts I hold to it are matters of personal opinion. I think a final unified project, with a few more illustrations and clever layout (the Notice Board would've made a lovely illustration/drop-dice/illustrated table), would be nothing short of a grand success.

Purchase this book, enkindle a sense of nostalgia that is cultivated in the sense of enjoying the work for sake of joy, rather than anything else.

Absolutely wonderful art and very charming hex maps here!   There is plenty of brainfood and inspiration to kick off a dynamic series of adventures with all the things I like to see and find useful: Rumors, Encounters, Interesting Situations, and Intriguing Locations!

I just got it and am looking at it now. Exceptional! Clearly written, beautiful art & layout. I decided to get it when I saw the environments & tiny cute creature designs. I'll print it out and put it to use as fantasy/rpg creativity fuel.

The beautiful art and maps are worth the price alone! Even if you don't play traditional fantasy RPGs, the images and ideas in this zine are inspiring for anyone looking for some fantasy, some whimsy, and some spooky. 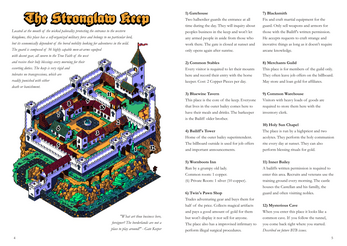 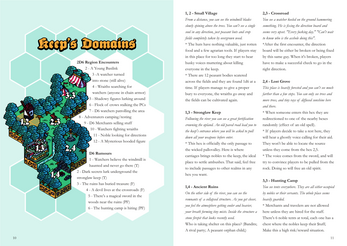 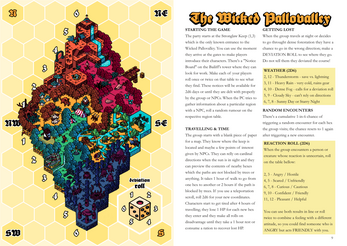